The Hurom HP Slow Juicer is a high-end and effective juicer that cuts down on the amount of time that’s needed to juice any fruit or vegetable. With a compact and stylish design, it doesn’t take up much space on the countertop, although this doesn’t affect how efficient it is with a variety of products. 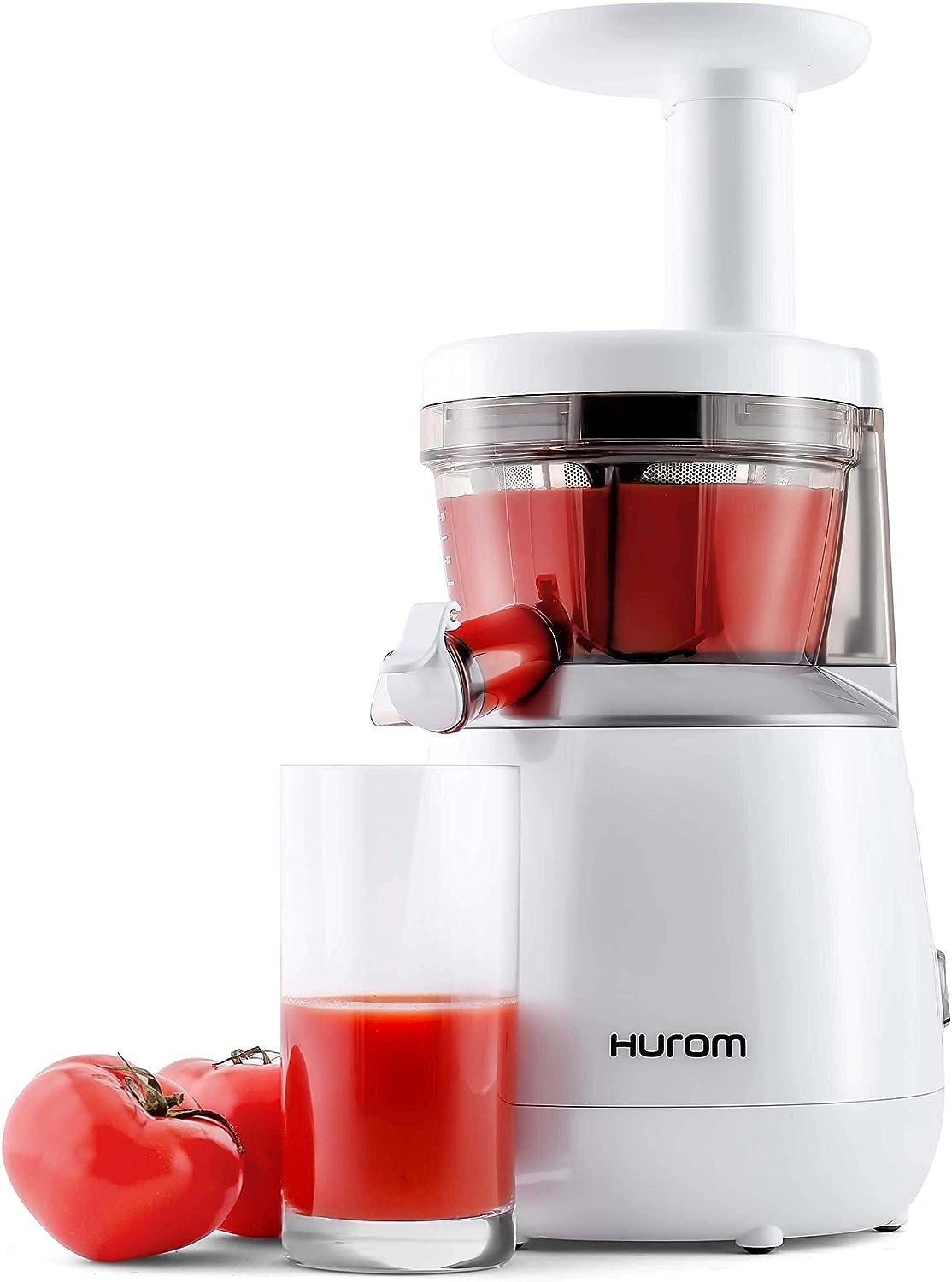 One of the best looking juicers on the market
Hurom HP Slow Juicer
This vertical slow juicer is good looking and high-end, yet affordable. With its compact size, it's one of the best juicer you can buy.
Check Price
[Show table of contents]

We all want to eat more healthy, although we often don’t have the time or energy to prepare our daily portions of fruits and vegetables. Have you considered buying a juicer so that you can get all the nutrients and vitamins you need in a way that’s easy to consume?

There’s so many different types of juicers on the market that it is very confusing to know which one to pick. Centrifugal juicers are easy to operate and are cheaper than the slower, masticating juicers that preserve more nutrients in the drinks they produce. If you want one of the best masticating juicer on the market, the Hurom HP Slow Juicer definitely stands out from the lot.

One of the defining traits of the Hurom juicer is that it produces much more juice with each piece of fruit or vegetable than any alternative, making it an effective choice for many people looking to improve their diet. Coupled with an automatic cleaning feature, which reduces the amount of time needed to clean up after juicing, this is one of the most interesting juicer in that price range.

Since being released, the juicer has received praise from quite a large number of people. Seeing all the positive feedback that Hurom has received on one of their flagship product really piqued our interest and we dug deeper into the reviews to understand why the Hurom HP Slow Juicer is such a widely recommended choice.

Despite this, we all want to make sure that any new kitchen appliance we buy meets our need, especially when they are on the more expensive side. The Hurom HP Slow Juicer should be no exception, as there are a variety of pros and cons that you’ll want to be aware of before buying it.

All About the Hurom HP Slow Juicer

The Hurom HP Slow Juicer is part of the company’s second-generation Personal Series, with the initial range proving to be quite popular. This is a vertical, masticating juice extractor that’s been designed to be as compact and slimline as possible. As a result, it’s one of the few high-quality, powerful juicers that takes up relatively little space on the counter. We were impressed by its slim design as it comes in a wide variety of colors and makes a great addition to any countertop.

The juicer takes advantage of the manufacturer’s Slow Squeeze Technology, which replicates juicing by hand to reduce damage to the juice during the squeezing process. It will produce much more juice per fruit or vegetable than many other types of juicers. This is especially true compared to centrifugal juicers, which tend to destroy more nutrient during the juicing process. This also means that the Hurom HP Slow Juicer creates juice that has much more nutrients than some of the other products on the market.

Another essential point for us is that the plastic parts are free of any BPA. It’s made out of an ABS casing that is dent-resistant. Alongside this, the juicing screen and Ultem auger have been designed to be much stronger than those found in the competition. The Hurom HP Slow Juicer is able to juice many harder fruits, vegetables and nuts such as almonds with ease.

The product also features an integrated juice cap that provides a few uses. The first is that it allows users to mix juices easily. One of the main function, however, is that it allows for a much easier cleaning process, especially coupled with its spinning brush. You simply have to close the juice cap, pour water into the juicer, and turn it on for a few seconds in order for the brush to remove particles around the strainer. When you are done, remove the juice cap to allow the water to flow out.

One of the last major features we’ve noticed about the Hurom HP Slow Juicer is that it includes a juice press that seems to be made of higher quality than the competitors. In addition to making juice, it allows owners to create almond milk, sorbets, and much more. This is enhanced through the recipe book that comes with the product, which we found to be a great addition.

While this juicer sports quite a lot of very interesting features, it does have a few drawbacks. Perhaps the largest of them is that its capacity is limited to 350 milliliters (11.8oz). This is about the size of a single glass of juice, and less than many other juicers on the market.

Of all the great features that this juicer has, we’ve particularly enjoyed the rinsing and cleaning process. Cleaning the juicer is much easier to do than you might expect, given the juice cap and the automated cleaning brush. It does require more than just a single rince however, and you have to do a more extensive cleaning when you’re done with the machine. But compared to other models, this was a definitive plus.

Naturally, we all want to make sure that we’re getting a decent amount of juice from the fruits and vegetable we’re using. From what we’ve seen, there’s almost no wastage, with nearly all of the product being used to create a drink. All that’s left after juicing is a dry pulp. As a result, you will be able to use less produce to create a healthy drink than you would with another juicer.

We also found that the juice that comes out is much nicer than you might expect. One thing that a lot of juicers don’t do is filter enough pulp from the juice, which is something that some people really don’t appreciate. There is much less pulp in the juice that the Hurom HP Slow juicer produces. As with any other juicer, you might still get some, but it’s a noticeable improvement compared to the juice produced by some of the lower-end competitors.

Another area where it shines is that the juice it produces has more nutrients than many other alternatives, due to its slow speed. This prevents the juice from heating and having the beneficial properties of the nutrients destroyed. This is one of the key factor why we consider masticating juicers to be best in class.

Noise is a common complaint among users of juicer machines. We were pleasantly surprised to learn that the Hurom HP Slow Juicer is much quieter than you might expect. Though you’ll still have to put up with a certain amount of noise, the volume is quite low, which is a nice benefit to have, especially if you’re using it first thing in the morning.

Your countertop space is precious, we get it. We like our kitchen to look clean and tidy, too. We try to use small kitchen appliances that complement the look and design of our cooking space. Thankfully, the Hurom HP Slow Juicer is one of the most compact juicer you can find. Its vertical build reduces the space it takes on your countertop, without compromising on performance.

However, this does lead to one of its drawbacks. Because of its size, the feeding tube is quite small. This means that you might have to spend more time preparing the fruits or vegetables before you can place them into the juicer as they will need to be cut in smaller pieces. We found this to be a clear negative as we don’t always want to spend a lot of preparation time to make a glass of juice.

Another drawback is that being a slow juicer, it can take some time to extract the juice. This is expected with most similar slow or masticating juicers, so it didn’t come too much as a surprise.

We also did some research to understand what current owners of the Hurom HP Slow Juicer think about the product. For the most part, owners have been quite pleased with the juicer and pointed to a variety of features that they like about the product.

Many of these have focused on the benefits that it offers, such as being quick and easy to clean, as well as being relatively quiet when in use. The fact that it processes quite a large number of fruits and vegetables has also been praised by many owners, as is the amount of juice that comes out of it.

One other important area that many users have praised is that it’s one of the more affordable options on the market for a juicer of this quality. While some products are cheaper, these are generally of lower quality and have some additional drawbacks. Many slow juicers like the Hurom can be much more expensive. This makes it one of the more cost-effective juicers you can get.

However, there have also been a few drawbacks that people who own the Hurom HP have experienced. We found that the most common complaint is that it is somewhat challenging to put together. Though this will typically only be an issue during the first few times you try it, it can also be a frustrating experience. Owners have noted that the Hurom HP Slow Juicer takes much longer to put together than many other juicers.

Finally, some owners have noted that the juicer could sometimes lock-up when in use. As frustrating as this might be, it can be even more irritating trying to fix the issue. In many cases, you might have to unplug it and take it apart to find out what the problem is. While diagnosing and fixing the issue should be quite easy, owners have noted that the process is frustrating. As such, they’ve suggested that this is one of the core areas where the juicer can be improved.

What Could Be Improved

The Hurom HP Slow Juicer stands out from its competitors in a variety of ways. We especially enjoyed the cleaning process and the clean design of the product. While it does have a few drawbacks, these are all relatively minor.

As such, the Hurom HP Slow Juicer is one of the more cost-effective options on the market. We highly recommended it for anybody who wants a high-quality juicer without having to pay an exorbitant price.

Rebecca Furrow is a freelance writer and juice expert. She’s been juicing for over 15 years and has written many articles on the subject for various publications. Rebecca loves to travel while always keeping her eye out for the best fruits and vegetables in the market!